What would you say if I asked you tell us a little bit about yourself?

I was born in Demirhan, a small village in Aydın province in 1982. I completed elementary school in multi-grade system, and went on to finish middle and high school there too. I then studied stage, décor and costume design, and later earned my Master’s degree at Marmara University Fine Arts Faculty, Department of Textile. While I was studying toward my Master’s diploma I began working fulltime at Armaggan, and after eight years I quit in April. I decided to concentrate completely on my workshop. I enjoy doing things regularly. For instance, there are cafés I go to regularly every day, I love sitting, drawing and reading books there. I hop on a boat to the other side of the city three or four days a week, and take walks. There are also several series I watch and directors I follow faithfully. I am really into manga and anime.  I generally like reading first editions of books. I usually buy all the books of a writer, and then start reading them one after the other.  Other than those, I love sitting outside on park benches, I repair mechanical cameras as a hobby, do my shopping at street markets, in short I love being among people.

How long have you been drawing and what drives you to draw?

I started drawing in high school, and I began to prepare regularly and consciously for higher fine arts studies. However my teacher Serkan Gönenç convinced me that it would be better if I studied stage and performance arts so I enrolled in stage, décor and costume design. I can easily say that having background in stage stay reflects on my designs a lot because the dramaturgy classes I took still influence me as I observe people on the streets. It has been very influential on shaping my drawings.

There is a Chinese saying, which goes along the lines, the artist does not fill the paper, he/she removes the extras and then gets lost in it. I too feel like I exist within the things I work on. Everything I see, observe, look at, come across fuses with me, and turns into something else, becoming an image on paper enhanced with pieces of me…

What drives me is life itself. You can say it is sort of like creating a journal by drawing rather than writing. It has everything in it, the green grocer, the street peddler, the bookseller, and the man in the box office. It has me actually. As they began to slowly take shape on white paper I realized that it was a farewell scene. This is actually the effect that an article by J. Berger describing how he drew a portrait of his father had on me. 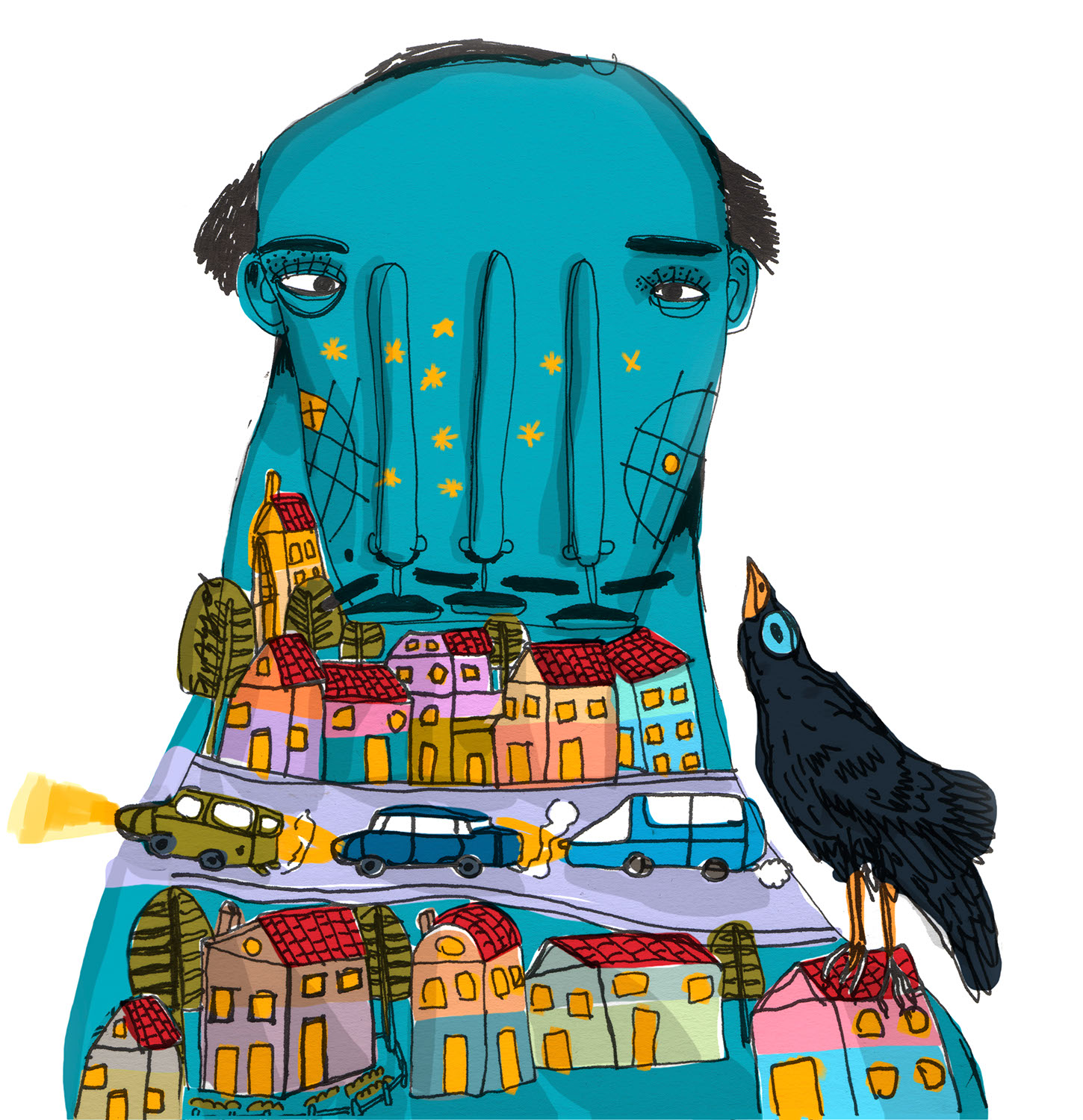 How did you start with product design? Was it a necessity or just because you enjoyed it?

I started to design products purely by chance. We had compiled some of my illustrations in a notebook for my brother’s store (serbest bölge), and the response we got was really good. Around that time, some of my followers on Instagram also wanted them. Then, All Design sort of supported me and helped me take the first step. Things developed quite fast afterwards.

What are the stages that the illustrations go through from start to end? Do you begin with a plan or spontaneously?

I don’t follow a strict plan but I draw in series. The works follow each other and they of course evolve over time. I can see that the evolution is related to my own development. And this pleases me because I get excited when I create something new.

We see a lot of double-faced people in your latest illustrations. How do you picture them in your mind?

This happened in a strange way. In my previous job, I worked a lot on Seljuks and ancient Turks. As I conducted research on these peoples, I kept coming across double-headed figures. Then I came across the same concept in Giorgio Agamben’s works. The Egyptians worshipped gods with animal heads, and I started to think about them, like the double-headed eagle. It was believed that they ruled both life and death, so the double-headed eagle was used widely. What I took away from all of these was kind of like a connection between the past and the present. On the one hand, there are the things we have experienced and filtered, on the other faces that don’t change bıt resemble each other. They are similar but not really so, like various aspects of life, like two heads that seem familiar and also alien. People that seem to be in the same place but also apart. These are the images on my mind.

What is the production process of the products you design? For instance, which stages does a bag go through until it reaches the end user?

When we talk about products, I should point out that I only produce what I draw. All products feature my illustrations. I select some of my illustrations and start by scanning them. Then I make printouts according to the type of product. Each product is made in different ateliers. The production is currently distributed among eight ateliers, which are all good in their respective fields. This is how things go. Both the products and the designs we use belong to me. I also develop the products and prepare the templates with the masters.  Once a sample template is prepared and approved, it is then printed and goes into production. I don’t print the items in high numbers. They are all printed and made in limited quantities. Then I move on to other illustrations. I collect the finished products from the ateliers, and bring them to my own atelier. They are then photographed and packed. Then I ship them to sales points.

What other art/design disciplines inspire you? Cinema, music, books… Who comes to mind?

I love listening to music, especially records. I have over 700 LPs, mostly jazz and blues.

There are so many writers that I can name. So I assigned myself a task. Every day, I share a book on Instagram in the story section, hoping to at least give some information and arouse curiosity. An important writer that had impact on my development is Ursula K. Le Guin. Foucault, Aldous Huxley, and Ray Bradbury also stand apart.

I have an insatiable appetite for films. Kim Ki Duk, Wes Anderson, Krzysztof Kieślowski, Jean-Pierre Jeune, Woody Allen, as well as Metin Erksan, Derviş Zaim and Reha Erdem from Turkey are only some of the many directors I love and follow.  Other than that, I enjoy photography, not taking photos but appreciating them. My photography efforts are mostly for documentation purposes. 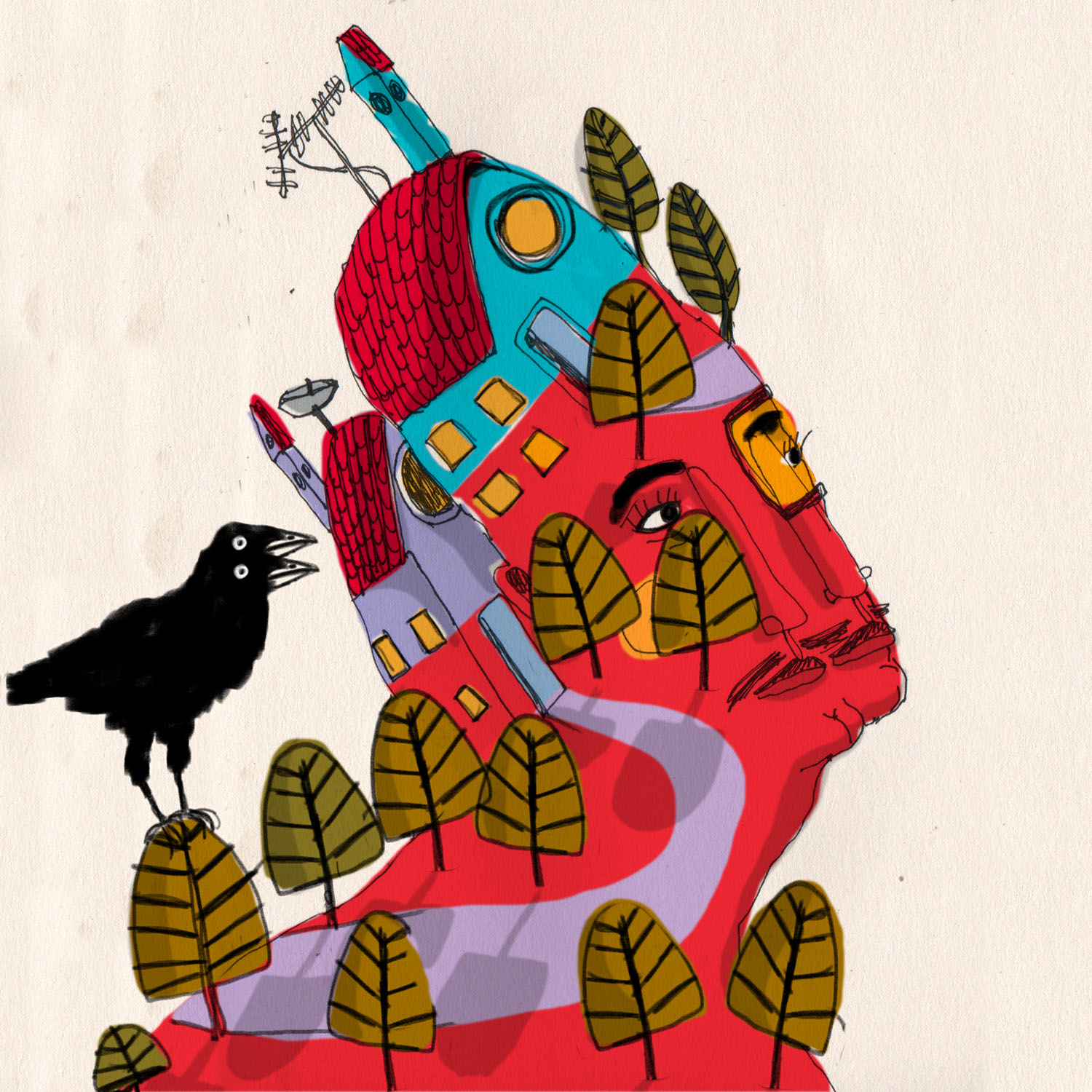 How was the atelier idea born, did it become a necessity?

The atelier idea was born out of necessity. When I had no space left at home to work and store books, I had to rent another place. There are currently two ateliers in Kadıköy, and I am looking for a new place that will be an open-plan workspace. I want to create a work environment where anyone can come in freely to print or find other solutions.

How do people reach you, and buy your products and illustrations?

First of all, there is my own shop, ateliermono in Kadıköy.

www.ateliermono.com is our online store.

Our products are also sold in various stores in Holland, Germany, Switzerland, USA, and Sydney.

Sayı 14
Tweet
A Gallery With No Space: GOM The Outstandings on the Virtual